Starts his career as a professional photographer in 1989.

Studies at New Bulgarian University and graduates in Management in Advertising.

His photographs have been displayed in exhibitions in Bulgaria, Israel, Turkey,

Latvia and the USA.

His most recent solo exhibition is on the occasion of the European Day of Jewish Culture in the Town Hall of Sofia, September 2011.

He has participated in international visual projects implemented in a number of countries among which Romania, Turkey, Greece, Jordan, Hungary, Serbia, the Dominican Republic, Scotland, Macedonia, Lithuania, Latvia and Estonia.

Twice a winner of the Golden Needle award for fashion photography in 2005 and 2008.

Photographer of the Year.

In 2012 wins first and third prize in two categories at the National Photo Contest Charity in Focus.

Exclusive photographer for Bulgaria for the three visits of Luciano Benetton. 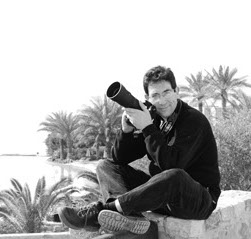